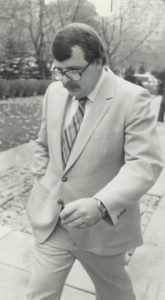 Brian Molony is a self-confessed compulsive gambler, who was paroled in 1986 after serving a little over two years of a six-year prison sentence for embezzling millions of dollars from his former employer, Canadian Imperial Bank of Commerce. Formerly an assistant bank manager, Molony stole £10.2 million from the Toronto bank to fund gambling sprees in Atlantic City, New Jersey and Las Vegas, Nevada, where he bet, and almost invariably lost, millions of dollars at a time.

Known as ‘Mr. M’ to casino staff, Molony reputedly visited all 297 casinos in Las Vegas and, in 15 months, visited his venue of choice, Caesars Boardwalk Regency in Atlantic City, 37 times. Following his final visit, during which he lost $1.4 million, he was arrested on his way home from the airport as part of an investigation into a bookmaking ring, although his employer apparently knew nothing of his fraudulent activity until informed by the police. Molony later described his obsession as ‘insidious, destructive and exhilarating’.

His story is chronicled in the 1987 book, ‘Stung: The Incredible Obsession of Brian Molony’, and inspired the 2003 film, ‘Owning Mahowny’, starring the late Philip Seymour Hoffman. Indeed, director Richard Kwietniowski held a private meeting with Molony before shooting started.