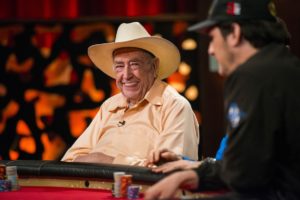 Doyle Brunson, otherwise known as ‘Texas Dolly’ and the ‘Godfather of Poker’, finally announced his retirement from poker, professionally and recreationally, in June, 2018, less than two months shy of his eighty-fifth birthday. In modern terms, his total live earnings of $6.2 million are fairly modest, but his achievements in World Series of Poker (WSOP) tournaments – which, by his own admission, he ‘never cared for’ – are anything but.

All told, Brunson won ten WSOP bracelets, including the WSOP Main Event twice, in 1976 and 1977, which puts him in a tie for second place, alongside Johnny Chan and Phil Ivey and behind only Phil Hellmuth, in the all-time list. In fact, on both occasions Brunson won the WSOP Main Event, he was dealt 10-2 in the final hand, but hit a full house on the river card to take the title; thus, 10-2 is immortalised as the ‘Doyle Brunson’ hand.

Inducted into the Poker Hall of Fame in 1988, Brunson may longer be playing WSOP tournaments, but still plays high-stakes cash games in Bobby’s Room at Bellagio, Las Vegas. At the WSOP First Fifty Honors [sic] Gala in 2019, he was named one of the four most important players in WSOP history.