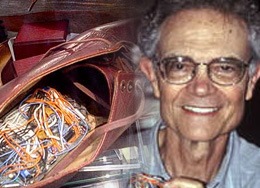 An engineer in semi-conductor integrated circuits, Keith Taft first discovered blackjack in Reno, Nevada in 1969 and, having read several strategy books, embarked on a career as a card counter. Having experienced only limited success, he set about building a computing device, which he could wear on his person, to count cards for him. He trialled his initial, bulky prototype, which weighed in at 15lb, in Reno in 1972 but, after an initial run of success, lost his entire bankroll and gave up playing blackjack for a while.

Following the invention of the microchip, in 1976 Taft revisited the idea and created a smaller, slimline machine, built in a pocket calculator, which was easier to conceal. He was subsequently introduced to blackjack ‘guru’ Ken Uston and, together, they formed a professional blackjack team. In April, 1977, the team doubled its $50,000 bankroll with ten days but, having experienced some ‘heat’ in Las Vegas, subsequently relocated to Harvey’s Lake Tahoe, where a frightening experience with security staff caused the team to disband.

Nevertheless, Taft soon returned to blackjack, creating increasingly sophisticated, pioneering solutions, including shuffle tracking, networking and digital photography, until his team – which included his brother Ted and son Marty – were arrested and imprisoned after being caught at the Marina, now part of the MGM Grand, in Las Vegas in 1985. Hailed as a pioneer, Taft was inducted into the Blackjack Hall of Fame in 2004.