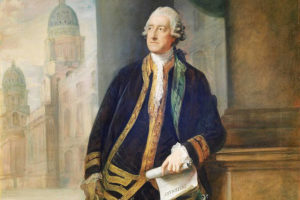 The invention of the sandwich in its modern sense – that is, two slices of bread with a layer of filling in between – is credited to John Montagu, Fourth Earl of Sandwich (1718-1792), although the circumstances in which he happened upon this ‘food of convenience’ are disputed. According to ‘A Tour to London, Or, New Observations on England and Its Inhabitants’ – a French travel guide, written by Pierre Jean Grosley in 1772 – Montagu once gambled for twenty-four hours straight with only a piece of corned, or salted, beef between two slices of toasted bread for sustenance. However, according to the Encyclopaedia Britannica, this particular incident, which reputedly occurred in 1762, is widely believed to be fictitious.

Nevertheless, Montagu did have a reputation for immoral conduct, including reckless gambling. Some sources suggest that he may have invented the sandwich to sustain him through long working hours at his desk, but it is not entirely inconceivable that he did so to create a quick, portable foodstuff that he could eat without breaking off from his gambling activity. The current Earl of Sandwich, also John Montagu, believes that his namesake is more likely to have eaten a sandwich simply as a matter of convenience during his active working life.